‘Welcome to prison without a roof’, sighed my driver as we crossed into the West Bank.

Ninety-six hours earlier, I was frantically trying to come up with a plot line for my rapidly approaching trip to Jerusalem. The blogs I had written prior to this one had largely written themselves: the Aurora Borealis in Iceland, Petra in Jordan, mountain gorillas in Uganda and whale sharks in the Philippines. All of them based on a single headline worthy event. Jerusalem’s magnetism, however, doesn’t stem from a monumental world wonder or a rare natural phenomenon. Instead, for most visitors anyway, Jerusalem’s draw is religion and history.  Which is all well and good except I can hardly be described as religiously devout (with apologies to my grandmother) or historically inclined (with apologies to my best friend). Truth  be told, I wasn’t even sure why I was going to Israel – aside from the fact that it was the most compelling destination in the “To” dropdown list on easyJet.com.

Since I was hard-pressed to come up with a storyline of my own, the people dearest to me were more than happy to provide one: safety. With all of the history, culture and vibrancy of the Middle East, it is increasingly tragic that the narrative for this region, and all of its people, continues to be conflict. At least that’s what the outside world perceives it to be. So I packed my bag full of prescient warnings from family and friends, vowed to be careful and boarded my flight to Tel Aviv.

On my first morning in Jerusalem I set out for the Old City. The Old City’s fortified walls contain sites sacred to the nearly 4 billion people globally who classify themselves as Jews, Christians or Muslims. Naturally, therefore, I headed straight for the visual potpourri of the souk (market).

Stepping into the souk, it seems as though I’ve travelled back in time. From within the souks’ narrow passageways, you can still immerse yourself in ancient times. Shopkeepers shout at each other in Arabic whilst Hasidic Jews hurriedly stream past in every direction. A different sensation awaits around each twist of tangled corridor. The main artery was clogged with tiny shops flogging a surprisingly diverse range of trinkets to tourists. I ducked into an alley that offered an aromatic cocktail of meat, fish and fresh vegetables – apparently the produce isle. The next wing was seemingly devoted to home hardware, with tools such as mops and toilet plungers adorning the shops’ exterior wall. Alleys flooded with sunshine appeared to be somewhat desolate, with – sometimes sleeping – shopkeepers sitting outside of their shops, looking an awful lot like fisherman, patiently awaiting the bite of a passing tourist. In contrast, those shops located in alleys offering plenty of shade appeared to be inundated with a steady stream of tourists.

As I meandered through the souk, looking for my favourite part of any market, the spice market, a naive thought began to unfold itself in my mind. Everything seemed so coherent. In the absence of any discernible discord, people of varying beliefs and ethnicity were busily carrying on with their lives. Granted, there were no Kumbaya moments of Jews and Palestinians holding hands in a sing-a-long, but there were also no obvious signs of division or malcontent.

As the temperature began to rise, I began touring the holy sites. First on deck, the Church of the Holy Sepulchre and my first glimpse of religious strife. The Church of the Holy Sepulchre was built on the site revered as the place where Jesus was crucified and, temporarily, buried. Interestingly, the Church is actually comprised of three churches including the Roman Catholic Church, the Greek Orthodox Church and the Armenian Orthodox Church. The three denominations can’t agree on who the site rightfully belongs to. Instead, they’ve crafted a tenuous arrangement in which access to the common grounds is divided up into strictly enforced time slots.

Sunlight shines upon the site revered as the tomb of Jesus Christ.

Leaving the Church, I followed the path known as the Via Dolorosa or the painful way. The Via Dolorosa, believed to be the route Jesus took to his crucifixion site whilst bearing his cross, weaves its way through the narrow passageways of the souk. Bumping into waves of people in the blistering heat of the day, it is not difficult to envision the scene on that fateful day.

From the Holy Church of the Sepulchre, I made my way to the Temple Mount and the site of the Dome of the Rock. Believed to be built on the site from which Mohammed ascended to Heaven, the Dome of the Rock is perhaps the most iconic jewel in Jerusalem’s glimmering landscape. 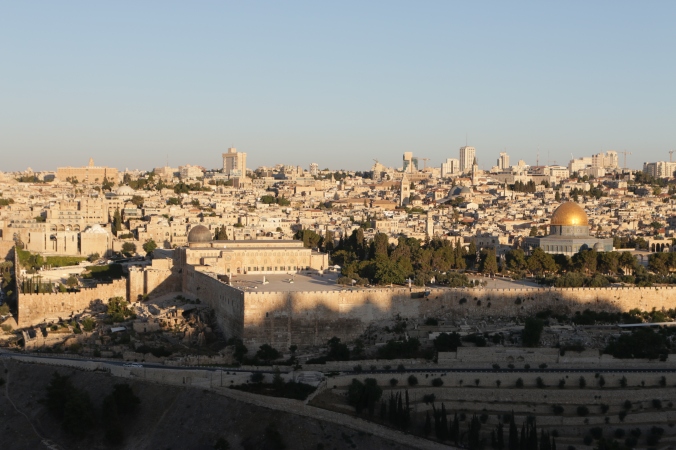 The morning sun reflects off of the Dome of the Rock’s golden domed roof.

What I didn’t realize, however, was that the Dome of the Rock was built atop the Temple Mount, a site revered in Judaism as the site of the First and Second Temple Mount. Though anyone is permitted to visit the Temple Mount, prayer by non-Muslims is strictly prohibited. In fact, the Western Wall – the holiest site in Judaism – derives its sanctity from the fact that, as the western retention wall of the Temple Mount, it is the closest place to the Temple Mount in which Jews are permitted to pray.  The divisions that have plagued this region for over two millennia began to form in my mind like lines on a map.

After admiring the ornately decorated Dome of the Rock, I descended to the Western Wall to watch Jews celebrate the dawn of Shabbat. Here is yet another barrier as men and women are partitioned into separate prayer areas by a dividing wall. Watching Jews cup the Western Wall with the palm of their hand, as if the Wall itself were a loved one, it’s hard not to be moved by the intimacy of their devotion. Like blood coursing through ones’ veins, prayers of the faithful, and perhaps the hopeful, are scribbled on scraps of paper and stuffed into cracks adorning the Wall’s surface. 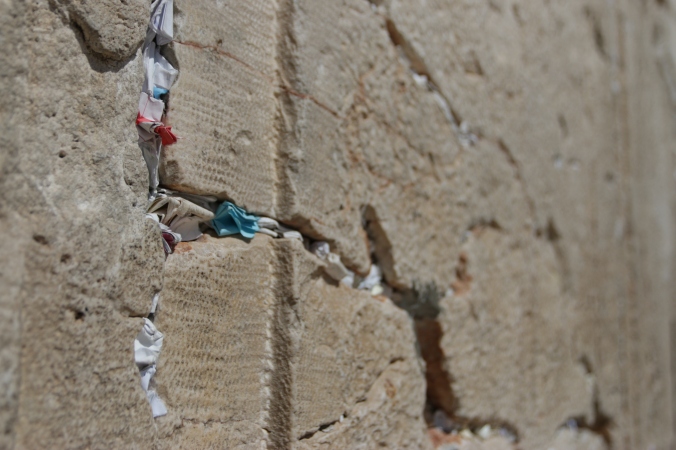 As sunset nears, I sense a palpable change in the behaviour of the Jews congregated in front of the Western Wall. Ebullient bursts of song and dance emanate  from the women’s prayer area as weeping men, clearly drunk on faith, link arms, dance in circles, stop to embrace and break out in song themselves.  The scene only grows more frenetic with each passing minute until the throngs of worshippers quickly disperse as Shabbat nears.  I return to my hotel, only beginning to comprehend the divisions that compartmentalize this city.

The next day, I gain more insight into Jerusalem’s invisible borders. A Jewish taxi driver refuses to take me to the Mount of Olives at sunset. Apparently, the route passes through several Muslim neighbourhoods. My would-be driver emphatically states that it is not safe for him to be seen in these neighbourhoods at night.

However, none of these invisible boundaries were as imposing or as ubiquitous as the wall undulating itself around the West Bank. On one side of the wall lies three generations of Palestinians displaced by the 1948 Israeli War of Independence. On the other side of the wall lies dignity, freedom of movement and the right to self-determination. 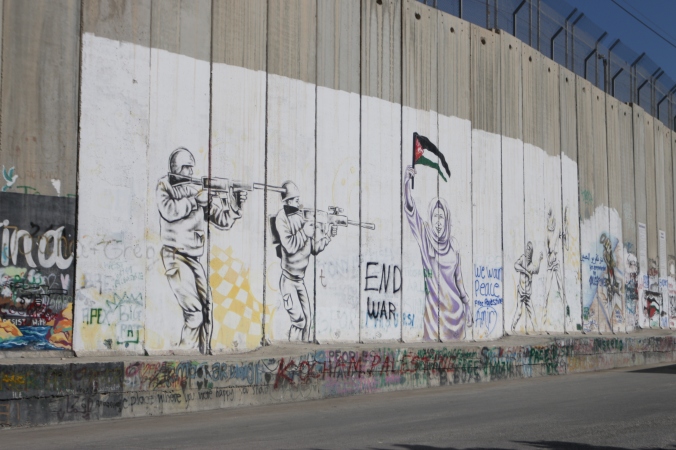 I had decided to make my way to the Church of the Nativity, located less than 10km’s away from Jerusalem, primarily because it is located in the West Bank and I was curious to see what was on the other side of the wall.  I hired a Christian driver for the day because Jews will not enter the West Bank for fear of safety, meaning I’d have to transfer into another taxi at the border, and it is difficult to find Muslims with permission to travel between Israel and the West Bank. Unfettered, we passed through a military checkpoint. My driver pointed to a sign which read:

“This Road leads to Area “A” Under the Palestinian Authority. The Entry for Israeli Citizens is Forbidden, Dangerous To Your Lives And is Against the Law.”

“This area is not dangerous,” spits my driver, “that sign is only there for the media.”

I had never before considered what it would be like to live in a region physically separated from the rest of the world. So I didn’t quite understand what my driver meant when he referred to the West Bank as prison without a roof.

My driver, an Israeli citizen, married a girl from the Christian community of Bethlehem. She, however, didn’t have permission to enter Israel. They could only see each other if he visited her in Bethlehem. It wasn’t until she became pregnant with their first child that Israel approved her application to live with her husband in Jerusalem.  Her family, however, are prohibited from leaving the West Bank. They cannot so much as attend Christmas dinner at their daughters’ home less than 10kms away.

It hadn’t occurred to me that Palestinians living in the West Bank would be barred from visiting sacred holy sites a few kilometres away in Jerusalem. Unless severely ill, access to Israeli hospitals, and the state of the art equipment and medicines they possess, is a dim possibility. Meaningful work is hard to come by. Education can be an impractical nuisance for children who are expected to help provide for their family. There are few tourists here. My driver takes me past empty cafes and patronless restaurants that sit next to vacant hotels. We pass a car hanging out of a tree, signalling auto-mechanic to passing motorists, apparently a cheaper alternative to buying a sign.

‘You cannot build peace with walls’, exclaimed my driver as we drove through Bethlehem. His second quotable quote of the day. 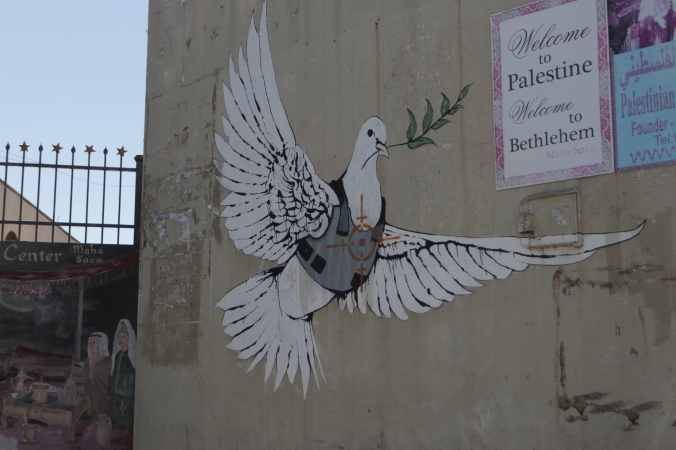 Don’t Shoot the Messenger – A rendering by Banksy adorns a derelict building in the West Bank. 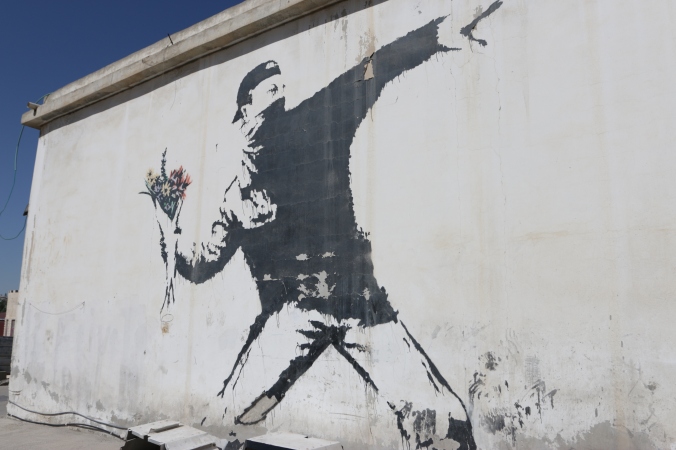 Flowerbomb – This Banksy rendering was found on the side of a car wash for trucks.

Obtaining permission to travel internationally from the State of Israel is an arduous process unachievable to most Palestinians. Those hoping to visit a sick relative, for instance, may be unceremoniously rejected after spending several hours mired in a series of security checks. Even if approved, there is no guarantee they won’t be turned away at the border. Worse yet, travel from Ben Gurion Airport in Jerusalem is prohibited for West Bank occupants.  Instead, Palestinians are subjected to a degrading, time-consuming journey to Amman in Jordan to fly out of Queen Alia International Airport. Re-entering the country is at best an equally onerous process.

On the way out of the West Bank, we pass the same military checkpoint. This time we have to stop at the military checkpoint to show the armed Israeli guard my Canadian passport, signalling that we’re permitted to leave the West Bank. I’m reminded of that memorable lyric from the Eagles’ song Hotel California – You can check-in anytime you like, but you can never leave.

Welcome to prison without a roof.

Stay: Hotel Prima Royale in Jerusalem for its reasonable prices, marvellous rooftop views and its walkable proximity to the Old City. Otherwise, stay in the German Colony & Baka. This region of the city is full of interesting spots to eat and/or grab a drink. Avoid staying in the Old City as nightlife is far more interesting further afield.

Try: Sunset cocktails with an unrivalled view of Jerusalem from the rooftop of the Notre Dame Guesthouse. Dinner at Adom in the German Colony of Jerusalem for its excellent food, trendy vibe and mouthwatering cocktails. Adom is located in the Old Train Station, which is worth an evening visit in and of itself.  Have dinner at sunset at the Mamila Rooftop Restaurant for its incredible selection of Israeli wines, the charming staff and the breathtaking view of the Old City.

Don’t: Miss out on Bethlehem. Try to spend some shekels in the West Bank if you can.