Maybe it was because I had just left behind a frigid city in the midst of winter. Maybe it was because I had arrived in Buenos Aires feeling devastated and broken. Or maybe it’s because you’re just that incredible. Whatever the reason, I fell in love with you Buenos Aires.It’s been awhile since I’ve fallen in love with a city. Vienna had me swooning in 2012, Barcelona in 2004 (though I was over you by our second date in 2017) and London, well, we’ve virtually been married since 2003.

Sure, I’ve fallen in love since then. Africa, you need only look at me to make me weak in the knees. Jordan, our fleeting affair was passionate enough to write an entire musical about, and Peru, I’ll always remember the way my first pisco sour tasted, the symphony of stars in the Cusco sky and the way Machu Picchu looked behind that lovely veil of clouds. But none of these places are cities. It’s easy to fall in love with a country, even more so with a continent, I do it all the time. A city, on the other hand, well that takes a special kind of ambiance.

I’ve tried to give other cities a chance, but the chemistry wasn’t there or the timing wasn’t right. Delhi, I’m sorry it didn’t work out but I couldn’t stand you from the moment we met. Rome, you smell. Harsh, I know, but it needs to be said. Reykjavik, if only the timing had been better. I just wasn’t ready for love in the middle of winter. Manila, it was a blind date setup by my friend Fiona. I don’t regret it if that counts for anything. Prague, it really could have been something, but my heart was broken and I frankly hated all cities at the time. Sydney, I was too young when we met, not yet ready for love nor capable of giving it. Amsterdam, I’m sorry I never gave you a fair chance, but I was still getting over Tanzania. Jerusalem, we both know that we would have spent our entire time together fighting. And Paris, you’re far too high maintenance for a city that’s living in the past.

I don’t know why, but I always try to pinpoint the precise moment it happened whenever I realize that I’ve fallen in love. It’s important to me for some reason that’s perhaps best left to a therapist. With you, Buenos Aires, that moment occurred on our first night together. Walking through the leafy streets of Palermo Hollywood past bars and restaurants crowded with people, seemingly immune to time, engrossed in conversations that appeared to be full of warmth and reciprocity (and really, how many conversations these days are truly reciprocal?), it occurred to me that I was falling in love.

That notion was enforced repeatedly throughout our time together. I can clearly see each of the reasons you captured my heart. The vibe in your aesthetically pleasing restaurants and the ingenuity of your cocktail lists. The ornately decorated bars that adorn trendy watering holes throughout the city. The way in which you make a concrete football stadium feel like it’s bouncing up and down with the ebullient blue and yellow shirted fans that occupy it. The way you smile, starting with the eyes before spreading to the lips. The sheer sex appeal of the tango. The tangible love and adoration still harboured for your matriarch, nearly 66 years since her death. The way your guitar wielding buskers perform on the subway with an amplifier and a microphone. The way each of you warn me about the dangerous character of your city at night despite the fact that I never once felt unsafe there. Your green parks, your wide boulevards, your colonial architecture. The list is endless. 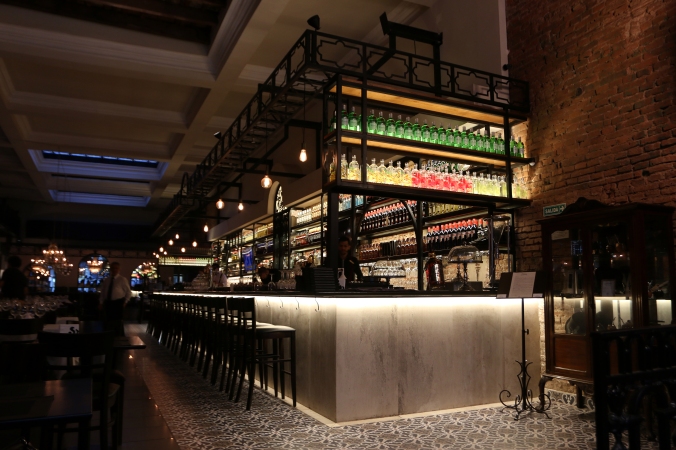 El Tropezon bar is a great example of the aesthetically pleasing bars that can be found throughout Buenos Aires.

Most of all though, I think it’s the way you kiss when you greet each other. This form of greeting is employed regardless of gender or rank. It’s used between football fans greeting each other at La Bombanera, between doctors and patients and between colleagues at bars, restaurants and grocery stores.  This simple act of tenderness seemed to invite such warmth and friendliness into your relationships that I intended to import it to Toronto before realizing that my Doctor, my boss and the random hockey fan sitting next to me may not be so appreciative. 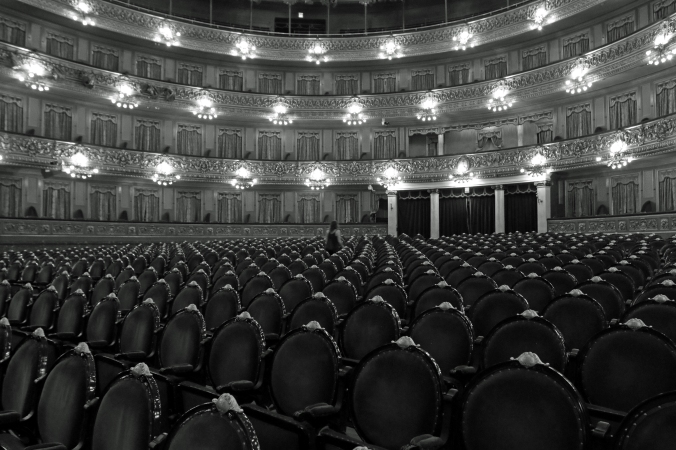 The Teatro Colón is normally full during the performance season. Tours are available during the off-season.

For a love to last, however, I truly believe that you need to love one’s imperfections just as much as one’s perfections. And I do love your imperfections Buenos Aires. I love the way your taxi drivers invent new lanes out of thin air. I love the cadence of broken slates of concrete shifting under my feet as I move about the city, evidence of years of harsh economic times.  I love the contrast between the visual signs of the city’s ongoing economic struggles and the inexplicably high price of eating and drinking out, of buying groceries and of attending a football match. I love how unapologetically Spanish you are, forcing me to learn more of a language than I have since Grade 9 French. I love the way No Habla Espanol is an invitation to continue the conversation in a more animated form of Spanish. So here it is Buenos Aires, I love you because of your imperfections, not in spite of them.

The entire time I was in Buenos Aires, I waited expectantly for some moment to shatter the illusion of love. Some moment that revealed to me that I was just infatuated with a new city, perhaps a temporary distraction from the issues I was having with my own city at the time. That moment never came. It lasted from our first night together right up until it was time to move on. I never lost that loving feeling.

Sorry, I can’t help myself when it comes to long exposure photographs at twilight.

There is a strange satisfaction I take in moving on. I’ve never really understood it, but I suppose the feeling of moving on is liberating to me. Once a person or a place is in my past, I try to ensure it remains firmly ensconced there. I take all that I can’t leave behind – the memories and the love – and I move forward. For that reason, I try to avoid returning to a city I’ve previously visited. London is an exception, because I stayed there long enough to forge lifelong friendships that need watering from time to time. Barcelona and Rome were exceptions too, brought about by personal and professional circumstances respectively. Otherwise, I try to adhere to the philosophy that time, money and energy are most adroitly spent chartering new paths.

So each time I leave a place behind, I try to take one lasting impression with me. A smell, a sound, a scene. Something final, something to remember. I made no such attempt when I left Buenos Aires. After 10 nights in the city of fair winds, I simply got into my cab and headed to the airport, content in the knowledge that I’d be back someday.

Until next time, Buenos Aires.

Stay: Livin Residence on Viamonte for its reasonable prices, suite style apartments and close proximity to many historic sites as well as two metro lines. Otherwise, stay in Palermo Hollywood for its leafy streets, sumptuous food and fantastic cocktails.

Try: Any of the restaurants in Palermo Hollywood, particularly those on Humboldt between Costa Rica and El Salvador. Las Cabras is a great choice for shared steak platters, live music and fantastic atmosphere. Grab a cocktail at Bar Negroni across the street while you wait for one of the highly sought after tables. Eat at Cafe San Juan in San Telmo for its great food, well designed restaurant and its friendly waiters. Check out Olaya for the fantastic cocktail list and the mouthwatering ceviche. Los Galgos is a popular spot for brunch before noon.

Once you’ve gotten over your hangover from last night’s dinner, the Recoleta Cemetery is well worth a visit. For photographers, the light here can be beautiful if you arrive when it first opens. The Teatro Colón shouldn’t be missed if you can help it, especially if you are in Buenos Aires during the performance season. Do catch a Boca Juniors match at La Bombanera if you can and ensure you save time for a tango club. Buenos Ayres Club features live music and it’s near to Cafe San Juan. Finally, Crystal Bar offers a fantastic view of the city if you’re looking for a late night drink.

Don’t: Shortchange yourself in Buenos Aires. This city is worth at least a couple of nights.